I was really surprised to answer the phone at 6:15 this morning and hear the announcement that today would be a snow day for our district. I was surprised because we had school yesterday when just about every other school in the county had off. And today, very few other local districts have off (some have two hour delays).

I am going to try to grade some assessments (something I struggle to force myself to do, more than doing dishes even). But, I am also going to play more video games than I probably should. Specifically, I will play Legend of Zelda: Breath of the Wild on the new Nintendo Switch.

We got this game the day it came out (my spouse and I are both big fans of the franchise; in fact I proposed to him with a Zelda-patterned cross-stich with a ring sewn on). My husband had to go out of town that weekend, so I got quality time on the system first.

Firstly, the Switch. It’s much smaller than the Wii U, and you can switch it from being hooked up to the TV, to being more like a handheld console. I prefer playing on the big screen, but it’s cool to be able to have it smaller, so that my husband can catch up on Hulu shows. I even took it to a family dinner to show my twin sister (also a big Zelda fan). It’s still just as lovely to behold on the smaller screen, it’s just smaller. And even using the smaller screen, you can set it up to multiple different controller configurations so that you can do however you prefer. (I like to hold the Joy-Cons by themselves in each hand; my husband likes to use them in the Joy-Con grip.)

Next, the game itself. It really seems very compatible with my gaming style, which is reckless. I tend to rush headlong into circumstances without planning much in advance; then, if I utterly fail, I observe how I fail so that I can base future planning on that. (My twin sister, by contrast, is cautious: she made it through Ocarina of Time without ever dying.) This game does not overly punish rashness; it autosaves frequently and does not force you to save at particular points. There are many situations where, instead of killing you outright, puts you back to your last safe moment with reduced health.

My husband and I are benefiting from watching each other play. For example, I solved a puzzle using the stasis ability and arrows; when he came on the same one, he happened to be out of arrows. Rather than retreat to gather supplies, he managed to find another way to solve the puzzle. I remembered his method the next time I faced a puzzle, and made sure to try other angles than I normally would at first. I don’t think I’d be doing half as well if I wasn’t playing in tandem with a different person who doesn’t do the same things I do.

I also like that there’s not a strictness to the storyline. In previous Zelda games, you had to accomplish goals in a particular order. This is not the case in this game. Yes, there are certain plot points that only get triggered after certain other things occur. Yes, there are enemies you can’t actually beat until you get the right weapons, armor, or power-ups. But the game doesn’t actually stop  you from trying to do things that you’re not equipped to handle. I think an abrupt “game over” screen is how the game designers chose to teach the player that it’s okay to run away from some battles. 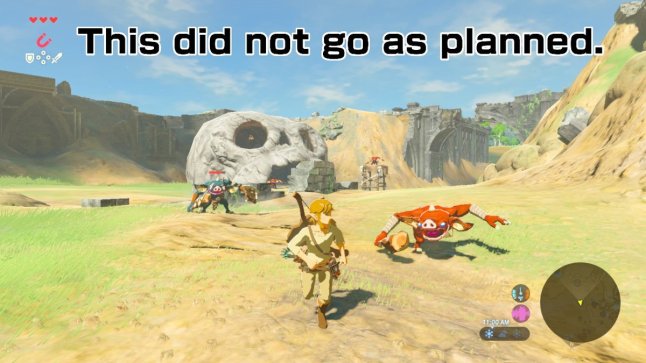 As for the content of the storyline, I think I’ll save that for another post, one with spoiler tags.

Almost nothing invigorates me more than when grown-ups outside our school take our kids seriously.

Our school district uses a vendor assessment system called i-Ready to track our students’ growth throughout the school year. Generally students spend about an hour on math lessons and an hour on reading lessons on i-Ready per week. We do a lot of incentives, like teachers giving raffle tickets for each lesson passed and then doing a drawing for a special lunch with the principal.

Even with incentives, many students hit a wall with i-Ready, motivationally speaking, in January and February. They just got burned out, and I can’t really blame them – it’s just how it feels. Teachers ramped up encouragement and incentives, but even they were getting frustrated with repeated issues running i-Ready in Google Chrome browsers.

So when students logged in this morning, they were thrilled to see new games had been added. It was a very different atmosphere in the computer lab! One student in particular named Zakhary was so excited, he said “thank you” to every adult in the room. I said to him, “Actually, we didn’t turn those games on. The people at the i-Ready company did. Want to say thank you to them?”

Of course he did! He was so excited!

Hey @CurriculumAssoc, my second grader has some feedback for you about i-Ready! pic.twitter.com/Wg4tJD8ysQ

Now, even just this much was invigorating for Zakhary. But then, at the very very end of our school day (we were lined up for dismissal), I got a Twitter notification.

@teacherofftopic Hi @teacherofftopic, our #iReady game designers loved the feedback & wanted to thank Zakhary for his note, could you please share with him?! pic.twitter.com/7HZRMBswbX

Luckily, Zakhary’s homeroom is just across the hall, so right before buses were called I went to their doorway, laptop in hand. His entire class gathered around to see the photo and listen closely as I read out the message. (Having a class quietly listening at dismissal is nothing short of a small miracle, by the way.)

So now not only is Zakhary excited about new i-Ready games, his whole class is excited for him that he was acknowledged by professional adults who created the games. And as a teacher, I’m exhilarated that someone outside our community took my student seriously. I too have a renewed investment in this product.

It’s a little like the zoo project we did last year – it makes a huge difference to student engagement when others are also engaged with them as partners in their learning.