So recently I wondered how I could use Snapchat in my classroom.

It didn’t take me long to figure something out!

So, Snapchat has a bit of a bad reputation because of its “volatile” messaging system. Basically, one sends or receives messages that, once viewed, disappear. There a couple of fears for this. First, a student may receive a message which contains inappropriate content — but then it disappears, so the sender escapes consequences. I could see a message recipient become the target of harassment or bullying this way. But the recipient could also be an accomplice; perhaps the inappropriate message was wanted, asked for, or some kind of furtive communication. There is also an issue where the sender assumes that their message is ephemeral and will disappear, but the recipient may screenshot it and share it out with others, which could be a privacy concern.

And all that stuff is way over my head in an elementary classroom anyway! I don’t want to begin to worry about it! Ugh!

Then again, Snapchat selfie filters are fabulously fun. I figured out a way I wanted to use them, too — to feature our students of the month. But I didn’t want to accidentally send or receive any messages on Snapchat during the making-of process. So this is what I did:

I went to the App Store on my iPad and searched for Snapchat. I changed the search parameter for “iPhone only.” See, Snapchat needs a phone number associated with it to send and receive messages and find your friends through your contacts. But it didn’t prevent me from downloading the app to the iPad and creating an account using my school email address. When prompted for a phone number, I simply continued without inputing one. Very soon I had access to the app, just not to the part where you can send and receive messages. I also realized that I could save the images and videos I was taking to the iPad itself by pressing the “save” icon. I’m used to seeing save icons that look like floppy disks, but Snapchat’s save icon is an arrow pointing downwards into a tray close to the bottom left corner of the screen.

You could also just screenshot them, but I find that difficult on a cumbersome, covered iPad. It’s easier on my phone, but I also don’t need all the icons clogging up the view. Plus, I was taking video, not photos.

So using this app I created another student of the month slideshow, which is good because I am several months behind in those. Next week I will continue playing catch-up and also test drive an app that is supposed to be pretty similar to SnapChat: MSQRD, or Masquerade. This app, recently acquired by Facebook, has more regularly available selfie filters. But instead of having its own messaging system, it encourages you to upload your selfies to Facebook, Twitter, and Instagram. It also saves automatically to the camera roll.

Word of warning! When apps like these feature a sponsored filter, it may or may not be one you want to share with your students. For example, on April 20, Snapchat featured a filter sponsored by a Comedy Central stoner comedy that featured the word “bong.” The next day it switched to a fast food sandwich, and today there are no sponsored filters among the featured ones at all. So maybe check it each day before handing it off to students, I guess.

A week or so ago I wrote about invisible work, particularly about valuing the people who do it. Sometimes that person is me.

Clutter happens. In our domestic environs we call it “Caitlin creep.” I let my things start to take over all sorts of flat surfaces, like a kudzu of crapola. But, de-cluttering is a hard task for me to motivate myself to do. Why do if I’m just going to need to do it again later? Like making the bed… why make the bed if I’m just going to end up sleeping in it? I’ll be making it again in twenty-four hours.

The less frequently used surfaces, however, tend to be clutter magnets. And I really wanted to get surfaces done because we need space for gift-wrapping, plus we have someone coming in tomorrow to look at a malfunctioning appliance.

So, I decided to use two strategies: 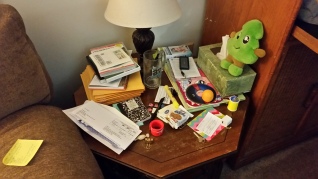 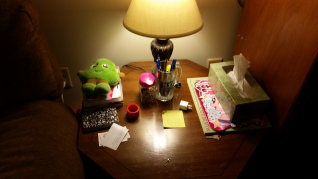 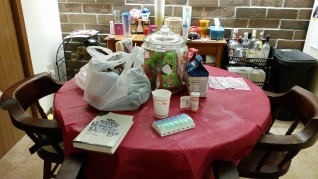 Did I make every surface one hundred percent clear? No, but I definitely made progress, even with the table in the bottom photos. And now, looking at that photos, I am seeing things that are there temporarily (gift receipts on the arm of the loveseat will be packaged with presents soon) and things that need new permanent homes (what am I going to do with those Halloween cups the week before Christmas?). So while I know I’m not done, I know the steps I am going to take next.

The basic way I worked was a lite version of UfYH, which is a link you should only click if you are okay with obscenity. There’s an app version you can get for iOS called Unfilth Your Habitat, but the Google Play/Android version has the real, mature-rated name. (“Unfilth” is a euphemism for the app title only; the app itself contains 100% of the profanity). If you don’t mind the vocabulary, though, it’s got loads of great advice about housekeeping for people with less-than-positive attitudes towards housekeeping, for whatever reason. I find I also apply a lot of the fundamentals in my classroom, or with school-related work. And when my classroom is mostly organized, I feel more in control of it, and more self-possessed.

I have only had an iPad for the past month or so. It’s not mine, it belongs to the school district. I earned the right to use it by winning during a lunchtime rap battle on a professional development day. (I won’t deny it was cheesy, but I really wanted the prize, and I am proud of rhyming “social media” with “Wikipedia.”)

As such, I am still quite the newb when it comes to apps and things, but these are my five favorite apps I have been using. I am absolutely and completely open to hearing more recommendations, though!

ChatterPix Kids: A very easy to use app that lets you lend your voice to an inanimate object. I used it to make a can of sliced mushrooms tell about the school canned food drive for our morning announcements. I can’t wait to use it for other things. (There is also a non-“kids” version of the app, and the only difference I can find is the inclusion of a martini glass sticker.)

Pic Collage for Kids: Another easy to use app that allows you to make collages. You can take photos and include them; you can use the stickers that come bundled in the app; you can also use images obtained from simple web searches. Be careful the the web searches, though – even using the kids version, I have managed to find web images that had some bad language. And at least once I couldn’t find anything related to my search term anyway. (I was searching for “snow leopard” and got pictures of snow and Snow White.) I made collages of our November students of the month and turned them into a slideshow for our morning announcements and school website.

Zoombinis: My family’s collective favorite computer game from the nineties is back as an iPad and Android app! And it holds up, too. Solve logic puzzles to help weird little blue folks safely reach a new homeland. It’s the kind of game you dive into and figure out as you go along, without reading a manual – so it may work pretty well with even pre-readers. I of course still love it, but I allowed some third graders to try it out and see if it still holds up. They’re intrigued. It’s worth the $4.99 price tag, in my opinion.

Khan Academy: Okay, so it helps that I was already using Khan Academy in my classroom with students. So I’m not judging the app as a standalone; I am already positively influenced by other experiences using Khan Academy. The login on the computer is easier than with the app, but I can see some positives about the app too. The interface is slightly different – in fact, many of the check-answer entry methods remind me of using a Nintendo DS. (I play a lot of Professor Layton games in my spare time.) So while I think I overall prefer using the website on the computer, I think the app is pretty great too – it makes Khan Academy more portable, and could perhaps reach kids just a little differently.

Book Creator: Okay, so this isn’t one I’ve used yet, but it is one I am looking forward to using with my after school group. We’re hoping to publish at least one ebook this quarter. One of my colleagues in my district has helped students publish 63 books online , and Book Creator is one of his favorite engines for that. So while I haven’t used it quite yet, I have been a witness to its great success!

I am realizing that I have two photo manipulation apps, one game app, one strictly educational app, and one book publishing app on my short list. I would love to hear more recommendations!