Huh. So I came over to WordPress to write this post, and realized that my post from last week never published. So I’ve backdated it appropriately and published it.

To be honest, I’m a little disappointed in myself for not writing more frequently about other topics. Lately it’s just been weekly roundups. That’s better than nothing, I should hope, but it doesn’t really give me the opportunity to reflect more deeply on a broader spectrum of topics. Part of it is time; I have less free time this quarter. Writing on the blog ranks below sleeping and eating on my to-do list. Part of it is that, while I do reflect every day on my teaching, it’s another thing to organize my thoughts in a way that can be communicated to others. I think I’m going to try to work on that for the next couple weeks.

Lessons: What a roller coaster week! We had a teacher PD day on Tuesday (due to local elections), then mathematics AIR testing on Thursday and Friday for third grade. I also threw my own twists into things, so lessons were not super consistent this week. It made me glad that students are so used to routines that classroom management was almost never an issue.

For the most part, we wrapped up the assignment from last week and went on to do math and literacy activities online.

Support: When it comes to standardized testing, I much prefer the ability to use devices connected to the internet than the old paper-pencil method. It is so much less stressful to distribute materials, and then not the urgent need to collect and send away after. But when something goes wrong, it can be heart-stopping. Luckily, we didn’t have any huge issues this week. Most small issues were solved with reboots. One student in my group had an issue with ChromeVox being on (which was, of course, very distracting for him) but we got that fixed before we officially started.

Things I Did Well: I started to become concerned with the “countdown” we’ve been using on our morning announcements. Since the beginning of the school year, we’ve included how many school days have gone by, and how many were left. It was really useful when approaching breaks, and when we neared 100 days of school. I kept it in because many teachers enjoyed hearing it (maybe more than the students, even!). But as that number of days left became smaller and smaller, I became concerned that it would lead to some sense that they also mattered less and less.

So what to do?

Well, I have also been in touch with our local 4-H office. They provided me with rocket launcher materials so that my after-school group could do this:

Now they have provided us with… an incubator! And 20 fertile chicken eggs. 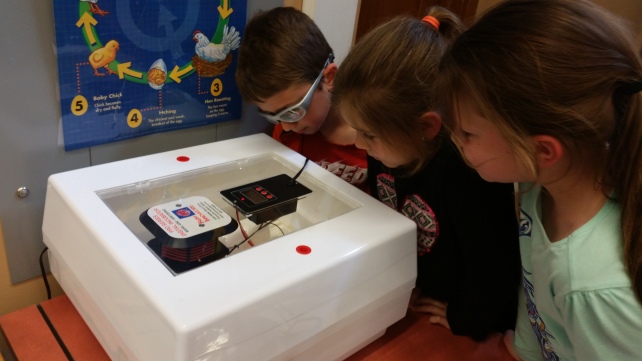 Now our school day countdown has become a countdown to hatch day (May 23rd, if you were wondering).

Things I Will Do Better: I wanted to better incorporate the concept of the incubator into our tech lab lessons next week. I want students to explore the idea that technology is not just computers and phones and tablets and Internet; it can help animals too. So maybe we’ll use the incubator as a jump-off point and it can inspire research and design through the end of the year.

Cold Prickly: I did not walk to work even once this week. There was always something, either during the school day or right after it, that necessitated me having a car. For example, it was Monday when I drove out to the farm to pick up the fertile eggs — could not have walked there! It was nice to have an extra fifteen minutes to get ready at home (or, on one morning, pick up some coffee at Dunkin’ Donuts). But, this morning in particular, I realized how a twenty-minute walk (fresh air, listening to a podcast instead of music) really helps me get in the right mindset to begin the work day. I really look forward to walking again next week.

Warm Fuzzy: The cafeteria lady has fed me twice today. She runs our school cafeteria by day (today serving cheese quesadillas) and her family restaurant by night (Chinese-American cuisine; she is from Singapore originally). My husband picked up the takeout but he said he saw her working. So she’s fed me twice today!