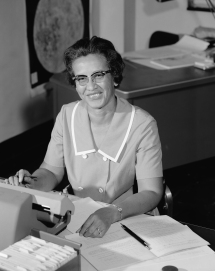 Hidden Figures is a film about three women “computers” — people who worked doing math calculations for NASA in the time leading up to manned orbital flights. Katherine Goble (later Johnson) is an actual math genius, who, due to her hard work and unmatched talent, pushed her way up to the Space Task Group, where her knowledge of analytical geometry earned her respect. Mary Jackson, with the encouragement of her supervisors, goes to court to secure her right to continue her education at an all-white high school, so that she can pursue her dream of becoming an engineer. And Dorothy Vaughan, frustrated by doing the work of a supervisor with neither the title nor pay that comes with it, sees an opportunity in the IBM computer; she teaches herself and those she leads to program the monstrous machine and make themselves indispensable.

There are no bad guys in this movie. I haven’t seen every movie ever, but I’ve become inured to the trope: when a movie is about racism, there is usually a big ol’ racist jerk, like an inverse white savior; for example, Hilly Holbrook in The Help. It’s a character who conveniently embodies prejudice and discrimination, and in defeating them, protagonists symbolically defeat racism. In Hidden Figures, racism is not so much a part of characterization as it is a part of the setting. White people are dismissive or ignorant, but never overtly, intentionally cruel. Racism is something that the white people in the story are simply not sensitive to until confronted with it. Kevin Costner’s character is confronted with it when he realizes that Katherine, who he relies on, has to take forty minute bathroom breaks because the nearest “colored” women’s restroom is a half a mile away. Like a good manager, realizing that the rule helps no one and hurts his team, he abolishes the rule. I think perhaps the most powerful interaction of this vein occurs in a women’s restroom between Octavia Spencer’s and Kirsten Dunst’s characters; the scene is so thoughtful and polite and well-acted that I audibly gasped.

I liked how the cinematography used color to draw attention to our leads, especially Taraji P. Henson’s character. In a room filled with white men in white shirts and black ties, where the only other woman is wearing neutral tones, Katherine Goble is wearing turquoise as brilliant as her mind. Her mug is the one brown one among alabaster ceramic. She is special, and it’s not hard to see if you’re willing to look; her rise feels hard-won yet also inevitable.

These were important stories to tell, and I’m glad to be an audience for them. I highly recommend this film.