I am an elementary school teacher… who happens to have a twin sister. So I built a “time machine” in my classroom. (Mostly after school! A little during a prep period when I was waiting to use a printer. But mostly after school!) All week students asked me about it. Most of my explanations sounded a bit like this:

But what I really enjoyed was when students gave me suggestions. First graders debated amongst themselves whether a time machine could be battery powered, and third graders thought metal might make a better base material than cardboard. Some students did not think it would ever work, but phrased their misgivings to me in a way clearly meant to be gentle and mindful of my feelings. And not a single kid touched it during class time! I never even said, “Don’t touch the time machine.” I was very impressed and appreciative!

Then on Friday I moved the time machine to the cafeteria. I told students it was interfering with the technology in the computer lab and that I was going to take it home after school. 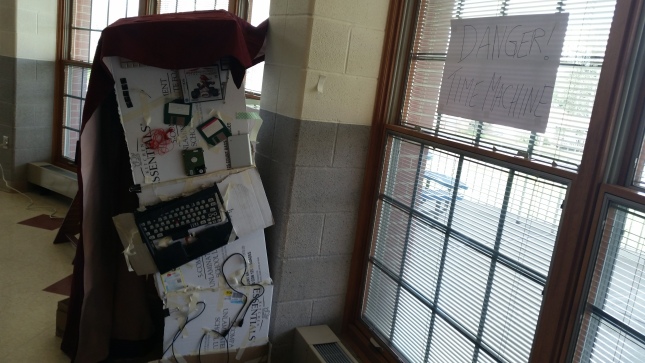 Then, during lunch duty, I pretended that students were getting too noisy and I announced that I was going to cancel recess as a result. (Actually one group was too well-behaved for that threat to be reasonable, so I pretended like they had to spend more time learning other table manners…) As I ranted, I slyly played a sound effect over a speaker — a robotic voice counted down as air swooshed, and the time machine shook. Finally, there was a crash, and a time traveler stumbled out! It was… me?! From a dystopian future where recess was cancelled! She (or… I?) warned me against canceling recess, then ran towards the teacher’s lounge to call the president and warn him, too. 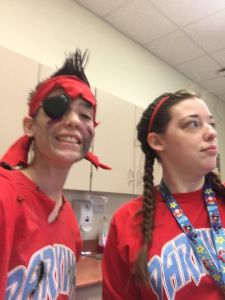 My future and present versions, side by side. Time travel: not even once!

Of course, the time traveler was my twin sister. We wore the same clothes, but her versions were torn and dirtied as though she’d survived a disaster. (Canceling recess is clearly catastrophic!) We played up the difference in our hairstyles — she even purpled up her mohawk! Hey, that could be a side effect of time travel. But, after our little skit, she came out and introduced herself. She even helped students with ketchup and salad dressing, because it was important to me that students felt like they were let in on the joke, rather than the butt of the joke. But each grade level agreed to leave the cafeteria as clean as possible so we could prank the next set of kids who came in!

At the end of the day, the prank took a lot more time setting up than to actually play out, but it was very fun. I don’t think any kids actually believed my time machine (which was made of literal garbage) really worked. But I think many kids wanted it to be

true — several of them went back to class and told them a time traveler had come to visit! And I plan to ask the older students next week to tell me what they would do if they had a time machine as a writing prompt in class. (Students are currently really enjoying using Google Classroom to answer prompts, and comment on other students’ work. And it gets them using their keyboarding and word processing skills, so that keeps me happy as the technology teacher!)

Here is a video I made of the prank with all grade levels incorporated, because they will want to see how other students reacted.